Magruder is one of the 12 Walkers, and arguably the most powerful.  As an ageless time-traveller, he acts as the prime villain of the Extraverse stories.

When Johnny Smythe is temporally cloned in the story 'The Crossing of Benjamin Street', Magruder is the copy that lands in the early days of Tribus. He is found by Dave Woodcock and the Ash Clan of the Heterodox Hell , who enslave and torture him for several years. His body is covered in burns and scars, the horrific treatment damaging his mind as much as his body. The boy Johnny Smythe is a distant memory, while Woodcock names him Magruder after his dead hunting dog.

After escaping from Hell, Magruder meets Martin, currently living as a middle-aged wanderer of the Tribus Wasteland. Martin takes pity on the teenage Magruder, as he reminds him of his friend Joshua from his first life. The two form a partnership, raiding settlements and gradually establishing their own tribe. Using a technique of subterfuge and brainwashing, they gather together urchins, kidnapping babies and toddlers from other settlements. They make a midnight raid on the peaceful heterodox Progeny, killing everyone but the children. Using the Progeny's power, Martin and Magruder are able to create a serum combining their powers. A sapling tree grows in the Progeny's sanctum

Each of the Walkers has a path that spans eons, each with a role that is infinitely complex, and infinitely more important to the temporal flow of the universe. He is highly intelligent, however devoid of education, and therefore tends to make impetuous, childish decisions. He believes his destiny to be unfair, and tries to claim power over the Vortex , the Avatars, and even the other Walkers to prove his rage to the universe.

The Third Wave has granted Magruder, after a hundred-year life of poverty, crime, misery and loathing, his birthright of a connection with The Vortex.

When he discovers Steven, the battle destroys much of Brian’s research. He flees the complex in search of Joshua. Joshua’s life is protected by The Vortex with a force known as Temporal Padding. Where the Walkers become involved in events, there are multiple pocket universes called Thinworlds created to cope with the paradoxes of their meddling. Thinworlds are only as strong as the will that guides them, and subsequently, most are ignored.

In the Super Future, Magruder is living out his final days. Having completed his involvement in his long series of Fixtures, he is no longer ‘of use’ to the universe. For his heinous crimes, the ExoGen Council of The Last Room agree that at the completion of his edicts he is to continue aging and die as a human. As a character, he becomes analagous to Freddy Kreuger. decaying and monstrous, attacking people in their dreams with telapathic manipulation and blackmail. extending his life through mangled technology and stolen energy.

Magruder escaping the ExoGen clones on one of their own motorcycles.

Magruder in a fighting rage.

Magruder and Steven as they appear in Mendax City 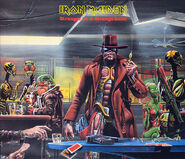 Cyborg Magruder in the Super Future.

Magruder staring down the ExoGen Tower 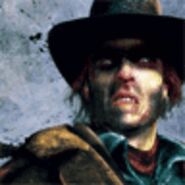 Add a photo to this gallery

ExoGen set up several ‘security measures’ in anticipation of Magruder’s reaction to his sentence. The first was a co-ordinated effort with Walker Legatus and the Greys, who committed a great sacrifice for the cause. Magruder’s crimes against Holly make him a demon to the Greys - he is The Great Destroyer of their lore.He travels the 12 systems of the Aquabelt, acquiring technologies that may extend the life of his aging body, and in his desperation commits atrocious acts of violence.

Retrieved from "https://extraverse.fandom.com/wiki/Magruder?oldid=4231"
Community content is available under CC-BY-SA unless otherwise noted.